What Is A PHURBA?

Used by Himalayan shamans and magicians to bind and pin down negative energies
In modern magick used as an athame in rituals such as cutting etheric cords
Very powerful magickal tools in the right hands.
This is a spiritual implement rather than a physical weapon, it is an ornamental knife with no sharp blades or edges.

These impressive Tibetan Buddhist Phurba (ceremonial dagger) are beautifully crafted and made of heavy hermetic 7 metal bronze and inlaid with precious Tibetan turquoise and red coral. The traditional combination of organic and inorganic materials with the 7 metals makes these natural organ accumulators  According to the Buddhist tradition, the triple-sided blade symbolises the three spirit worlds, with the Phurba itself representing the World’s axis, which unites all three worlds together. Phurba is also there word for Thursday, the middle day of the week which represent the lightning god Vajra, (similar to Thor in the Norse tradition)

The Phurba, the triple sided Tibetan ritual dagger or stake was originally  a peg used for securing a tent. Literally a stake used for tethering. It was infused with power to pin down negative energies and create a safe and sacred space for the family yurt/tent to be settled. However any tent peg, triple bladed knife or other objects of similar shape cannot be considered to be the same thing. A Phurba, has three distinct segments, one of which is a characteristic three – sided blade or point mentioned above. Its middle section represent caged or trapped lightning infused into the the phurba at its creation by a magickal and secret smithing process. The three faces represent the ruling spirits of heaven,earth, and the underworld, the horse head on top represents the practitioner’s own power (wind horse) that works along with the force inherent in the blade.The lower part of the blade is said to represent “Method” while the handle “Wisdom”. These would have been two objects that were vital in the survival of people in these hash regions. The Phurba is patterned after an ancient Vedic tool that was plunge int the ground and could sometimes be uses as a stake or spiritual tether. It is also regarded as a powerful weapon which subdues evil spirits and negative energies, transforming them into positive forces. As a Buddhist ritual too it is utilised as a dagger or dart  that symbolises the slaying or destruction of opposition or obstructions. It is not meant to actually hurt in any way a sentient living being, the blade is not sharp. It is used against evil spirits by the tantric practioner. The idea is to pin them down from causing harm or to release the spirit out of its suffering and thereby guide it to a better rebirth.  Phurba is used as a means of destroying violence, hatred, and aggression by tying them to the blade of the phurba and then vanquishing them with its tip. Phurba (Ritual Dagger) is used in the ritual slaying of negative emotions, such as anger. It is regarded as possessing magical powers, and is an essential artefact in the sacred mask dances. The phurba is not a physical weapon, but a spiritual implement, and should be regarded as very sacred powerful object.

The Power of The Phurba
From Pythagoras to modern day, there are many accounts of Phurbas capable of moving under their own power by flying about quite fast with enough force to be capable of lifting a man off the ground. Pythagoras friend and teacher Abaras from the himalayan reason used to fly about on his ”Magick Dart.” Buddhist writings claim this force to be four time stronger than an average man.  Additionally they claim that if you are chased by one you will not be able to outrun it. Additionally, a Phurba can unerringly track any being it has been pointed at. Several accounts describe the faces on either side of the pommel,  animating and even biting the hand of a person who attempted to pick it up but was not authorised to do so. anyone gripping the handle. Miraculously when the grip is released there is negligible damage to the hand that was hanging on to it. Phurba can protect you from ghosts, others scrying information about you, from necromancy and from entropy of your magickal ability as it can act as your personal magickal battery back up. Always remember that you Phurba has its own personality and will willing work with you if you treat it with respect and never attempt to use it to do anything low on ethics. A phurba can never be forced or controlled with magick – its spirit in residence must be respectfully requested to work with you for the highest good. 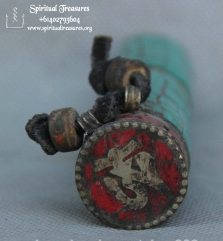 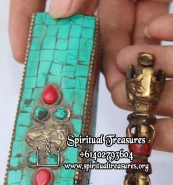