SOLD
5 Exquisite ex-museum pieces – For Sale individually or as a set – (move very quickly if you desire the set) Pottery fired grey-black small chips on some pieces and original museum labels in Spanish.

It is very rare to find any genuine South-American deity artifacts being offered for sale. This is your chance. If you feel connected to South American culture or are of Inca heritage these are a must have.

Music God depicted with an ocarina on his head.

The ocarina /ɒkəˈriːnə/ or /oʊkəˈriːnə/ is an ancient wind musical instrument—a type of vessel flute.A typical ocarina is an enclosed space with four to twelve finger holes and a mouthpiece. It is traditionally made from clay or ceramic. Expeditions to Mesoamerica resulted in the introduction of the ocarina to the courts of Europe along with the the song and dance that accompanied the ocarina. These were used to alter consciousness and open the way to the gods. Therefore the ocarina was considered magickal. This is a rare depiction of the ocrina as a deity

Cocomama The Goddess of Health, Happiness and Recreational Drug-taking — but not chocolate!

In fact, she was a flirty female who was cut in half by jealous lovers and subsequently transformed into the world’s first coca plant. Men who managed to satisfy their woman’s sexual needs were rewarded with a munch on the coca leaves afterwards. From which possibly springs the tradition of having a cigarette after sex.
Although the coca plant does contain a tiny amount of cocaine, it also contains many other nutrients and stimulants that, according scientific reports are extremely good for you if you want to keep on the go without dangerous after-effects.

6.7 cm x 5.3cm x 1.4cm
RAin first began when Ilyapa, the Inca storm god,  shot a sling at a water pot carried by his sister the Milky Way. It cracked of crockery with a sound of great thunder and produced the first  deluge.  In times of dire drought the Inca tie up a black dog until it’s wilting with thirst. Then Ilyapa will take pity on the poor creature and send rain in abundance.

A Rare original depiction of Ekkeko, god of the hearth and wealth.

Modern Ekkeko is depicted as a comical Santa Clause type person with his hands filled with things. The ancients made dolls that represented him and placed a miniature version of their desires onto the doll; this was believed to cause the user to receive what he desired.

Originally he was a god of war and victory holding the bones of those he conquered.

The use of Masks in celebrations is an old Peruvian tradition for religious ceremonies. Incas made the mask use wood, ceramics, cotton, feathers and any other material with attractive colors, to make masks of all types of  Inca spirits. It appears that this little figurine was made in service to the others. 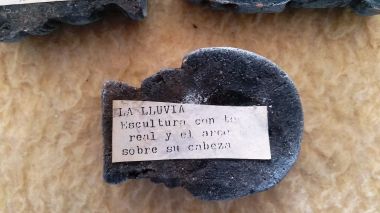 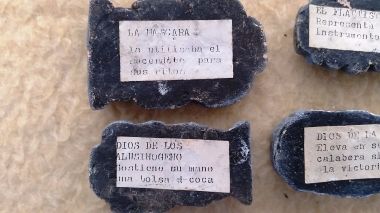