Only a few characters are released each year and Jaing Wei is a very popular and sort-after character. It is in the form of a bookmark to encourage people to read the Chinese classics and is easy to place in a bowl on the home ancestor altar.

This is a rare find – This enameled representation of Jaing Wai, a heroic  ancestral spirit invoked through the use of a Chinese mask.
This is the style of Chinese  masks that are best known in the west. This is an enigma as they are seldom drawn or sculpted, usually they are only painted on actors’ faces. Each actor becomes very proprietary with his face paint and with channeling the spirit of their character into their performance. There are 116 different opera masks. Once the actor dons this face paint they describe being overshadowed by Jaing Wei’s personality which grants them courage, strength, intelligence, Machiavellian craftiness, dogged loyalty and Taoist secret wisdom. Our English word personality comes form the greek word “persona” which means mask. Having access to these sacred Chinese masks can allow you to access this spirit so hard representations of them have been discouraged.

This is an official collectible of the Chinese National Essence Opera Company.
only a limited number of each character has been released as a book-mark/letter-opener. Still in its original packaging. The Box is unmarked. This is the mask of Jiang Wei  Chinese opera character Number 77 with red black and white face & a Taoist Yin Yang symbol on the forehead. The sword shape of this book mark also represents his famous magickal swords.

Chinese Masks
China has a rich and colourful cultural history, and masks have played a major role in Chinese tradition for thousands of years. The origins of Chinese masks are rooted in ancient religious shamanism. Over the centuries and many generations, artists refined the symbolism. The use of colours on Chinese masks continues to be used to indicate personality, emotions and identity of a character.

Types of Chinese Masks
There are several types of Chinese masks: dancer’s masks, masks for festive occasions, masks for newborns, masks designed to keep homes safe and theatrical masks. When used on the stage, masks help viewers determine, at a glance, the attributes of a theatrical character. Masks are usually made from wood. However, Chinese opera masks, possibly the style that is best known in the west, are actually painted on actors’ faces. It is therefore nearly Impossible to acquire a collection of Chinese opera masks.

Jiang Wei or Chiang Wei
Jiang Wei is a favourite character, central to  the opera “Iron-Cage Mountain” Adapted from an episode in the Chinese classic “Romance of the Three Kingdoms.” He is a real historic figure and this Opera romaticises his exploits and invokes his spirit. Jiang Wei with a red, black & White three-tiled face is a commander of the armies of the kingdom of Shu. He is a Toaist Master. He has great ability and a profound knowledge of the universe. Jiang Wei became the successor to Zhuge Liang. Jiang Wei begins as a general in the service of the kingdom of Wei, ruled by Ts’ao Ts’ao. Even though Jiang Wei had not shown his military skills on the battlefield, he had already been praised by Zhuge Liang as a capable person, and was quickly made Zhuge’s leading officer at the age of 27, probably out of political consideration. Jealous minds conspire against him. They slander his good name and character whilst he is away on a military  exercise defending the kingdom. Upon his triumphant return, as fate would have it, when Jiang Wei was outside the city walls with his troops, they closed the city gates and would not allow Jiang Wei to re-enter. Jiang Wei was forced to defect to Shu, the opposing kingdom, leaving behind his mother in Wei territory.  The new territory is ruled by Liu Pei. The ruler’s great strategist, K’ung Ming, appears to convince Jiang Wei to transfer his loyalties to the kingdom of Shu, ruled by Liu Pei. When K’ung Ming later died of exhaustion, Jiang Wei also assumes his position as chief military advisor.  Although Jiang Wei is a righteous character, the fact that he switched masters indicates apparent disloyalty. As a result of this dualistic ambivalence, he cannot be portrayed with a solid face pattern, but instead features a three-tile face pattern with red as the primary colour. The Yin and Yang symbol on his forehead indicates that he has knowledge of Taoist magic. As a general in the service of Liu Pei, Jiang Wei’s helmet is not adorned with the pheasant feathers and foxtails featured on the helmets of the opposition army from his native home. He wears green armour and carries both a jewelled sword and a long-handled sword. The Jewelled sword indicated his magickal strength and the long handled sword his martial arts prowess.  Jiang Wei leads many brilliant battles against his homeland that all are very expensive and very unsuccessful. Yet he is so duplicitous no one suspects that he may be sabotaging the kingdom of Shu and supporting his home kingdom in absentia, not even his home kingdom. Eventually Liu Pei can no longer afford any of Jaing Wei’s inspiring but unsuccessful military adventures and his other advisors are successful in a petition to have Jaing Wei stood down. Just as this occurs the Kingdom of Shu learns of an attack being launched against their kingdom by the kingdom of Wei. They have learnt the the kingdom of Shu is nearly bankrupt and  exhausted. In desperation Liu Pei turns back to his trusted adviser. As a former General of Wei, he is asked  what strategy he feels his country men will pursue. Jiang Wei convinces Liu Pei that they will try a sneak attack and Jiang Wei leads the last of Liu Pei’s men out to lay wait in the pass. However, the Men of the kingdom of Wei make a frontal assault and walk into the virtually unprotected city for an easy victory. The people of Wei realise what Jaing Wei has done. His years of manipulating whilst he was in exile have given them the victory they were after. He is finally allowed to return to his home and mother.

Colour Meanings
Many colours are used in any given Chinese mask, but the dominant colours impart specific characteristics. 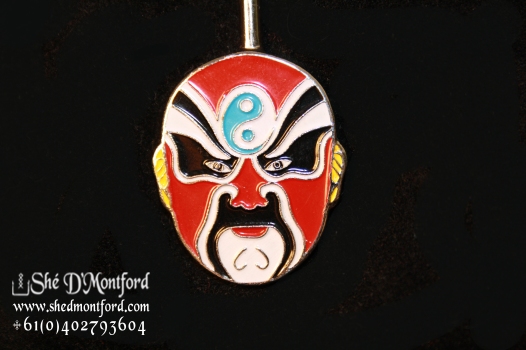 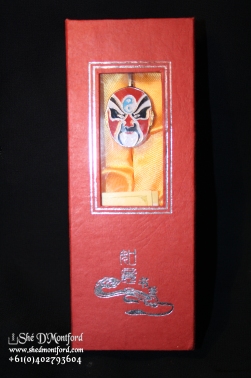 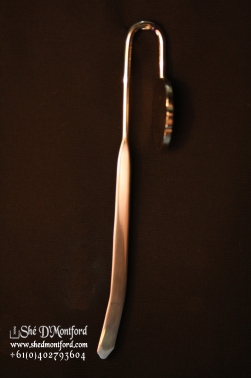