The stunning 1 carat, translucent, deep blue/green colour change, perfect double star sapphire at the heart (rose) of this cross is a rare and beautiful stone. Ad to this exquisite fine silver work coated in white gold to prevent tarnishing, and studded on its surface and along its sides with 12 Zircons; it sparkles and shines. This breathtaking piece will resonate with all belief systems that hold the cross as a mystical symbol.

The cross symbolizes the point of power change change in many

spiritual traditions. It featured in Celtic art-work long before the Christian church adopted it in the 4th century. This particular cross shape has deep esoteric symbolism. In ancient Babylonian & Egyptian culture it was a tasteful way of symbolizing the sacredness of the reproduction process, a phallic symbol reduced to a cross as its most basic representation.

The Year as a cross – the circle of days in the year intersected by the opposing solstices and equinoxes. Legend  states that St Patrick combined the Christian cross with the circular pattern of the Celtic Pagan sun-crossed wheel, as a way to associate the pagan joy in light and life with the Christian message of death and suffering  with their cross in the minds of his converts. Another theory suggests that, by laying the symbol of the Christian cross over the symbol of the per-existing Celtic sun-cross , Christians were illustrating the supremacy of Christ over the sun god or moon goddess.

Cross of the Year

The Cross is a symbolic acknowledgement of the solar maxima (solstices and equinoxes). The number of annual solar feasts can be doubled by including the midpoints between those dates, when the Sun is in the second decan of each of the fixed signs of the Zodiac. These holidays have long been recognized by Christianity as a way of preempting their celebration by more naturally-observant pagan predecessors. What once were (and for neo-pagans have again become) Imbolc, Beltane, Lughnasad, and Samhain, became holidays recognized by the Roman Church as Candlemas, Roodmas, Lammas, and Hallowmas.

The Coptic Church is the main Christian Church of Egypt, established by Mark in the 1st

century (around 60 A.D.). The Church now also has dioceses around the world and in particular Africa and the Near East. The early Gnostics and Copts quite possibly adapted the Egyptian Ankh Cross as the basis of its emblem, which then evolved as the sect spread. The Ankh is found on numerous antiquities; for example the 6th century sandstone grave marker found in the pre-dynastic area of El-Badari, Upper Egypt. Old Coptic crosses often incorporate a circle; sometimes large, sometimes small. The circle of the Ankh originally represented the Sun god. For the Coptic Church, the circle represents the eternal and everlasting love of God. As Copts migrated from Egypt, so their cross style was influenced by different cultures; in particular, North Africa. Ethiopian Coptic crosses can be so sophisticated that it’s difficult to find a cross in the design. For example, the Ethiopian Cross, an elaborate baroque style or filigree reflects the richness of the hearts of people in the Coptic Church. It evolved in to the renaissance symbol of the Rosy Cross sometimes associated with hidden  underground church orders that are repositories of hidden wisdom and sometimes  with the Illuminati.

The rosy cross (also called “rose cross” and “rose croix”) is a symbol largely associated with the semi-mythical Christian Rosencreutz (1378-1484), alchemist and founder of the Rosicrucian Order. It has several meanings, depending on the source. Some modern Rosicrucians claim that the rosy cross pre-dates Christianity, where “the cross represents the human body and the rose represents the individual’s unfolding consciousness.” It has also been suggested that the rose represents silence while the cross signifies “salvation, to which the Society of the Rose-Cross devoted itself by teaching mankind the love of God and the beauty of brotherhood, with all that they implied.”

However, in general, it is a symbol of the human process of reproduction elevated to the spiritual: “The fundamental symbols of the Rosicrucians were the rose and the cross; the rose female and the cross male, both universal phallic […] As generation is the key to material existence, it is natural that the Rosicrucians should adopt as its characteristic symbols those exemplifying the reproductive processes. As regeneration is the key to spiritual existence, they therefore founded their symbolism upon the rose and the cross, which typify the redemption of man through the union of his lower temporal nature with his higher eternal nature.” It is further a symbol of the Philosopher’s Stone, the ultimate product of the alchemist.

Crowley and the Rosy Cross
The symbol of the rosy cross played a substantial role within the system of Thelema as developed by Aleister Crowley. In a cosmological context, the rose is Nuit, the infinitely expanded goddess of the night sky, and the cross is Hadit, the ultimately contracted atomic point. For Crowley, it was the job of the adept to identify with the appropriate symbol so to experience the mystical conjunction of opposites, which leads to attainment. In this sense, the rose cross is a grand symbol of the Great Work: The Tau and the circle together make one form of the Rosy Cross, the uniting of subject and object which is the Great Work, and which is symbolized sometimes as this cross and circle, sometimes as the Lingam-Yoni, sometimes as the Ankh or Crux Ansata, sometimes by the Spire and Nave of a church or temple, and sometimes as a marriage feast, mystic marriage, spiritual marriage, “chymical nuptials,” and in a hundred other ways. Whatever the form chosen, it is the symbol of the Great Work. Crowley also makes clear that this process is reflected in the sexual act as well:  So we need not be surprised if the Unity of Subject and Object in Consciousness which is Samadhi, the uniting of the Bride and the Lamb which is Heaven, the uniting of the Magus and the god which is Evocation, the uniting of the Man and his Holy Guardian Angel which is the seal upon the work of the Adeptus Minor, is symbolized by the geometrical unity of the circle and the square, the arithmetical unity of the 5 and the 6, and (for more universality of comprehension) the uniting of the Lingam and the Yoni, the Cross and the Rose. For as in earth-life the sexual ecstasy is the loss of self in the Beloved, the creation of a third consciousness transcending its parents, which is again reflected into matter as a child; so, immeasurably higher, upon the Plane of Spirit, Subject and Object join to disappear, leaving a transcendent unity. This third is ecstasy and death; as below, so above. The rosy cross is further symbolic of the grade of Adeptus Minor in the A.’.A.’., the Qabalistic sphere of Tiphareth on the Tree of Life, the magical formula INRI, and the concepts of Light (LVX) and Life.

The Cross is an important symbol in the religion of Voodoo. The point were the will of the

gods cross with the will of men is where magick can occur. Maya DEREN (1953) convincingly established in her book DIEUX VIVANTS D’HAЇTI that the cross of legba is in no way indebted to any Christian influence even if it is identical in form to the roman cross. In her opinion, the voodoo cross is the symbol of the unity of the universe that has been entrusted to legba’s care and ministry by the Grand Mèt. The vertical branch of that instrument represents the link which makes the connection between what is above and what is below. This is the route of the “invisibles”. In fact, the foot of this vertical axis plunges into a submarine country which is considered to be the mythical paradise of the Lowa who come up at the call of the living. The horizontal branch stands for the world of man and things. It is only at the cross road of these two worlds between the divine and the human earthly axes that the encounter between the divine and the human is realized. Legba watches over the cross road. This explains why the offerings are made to him at the intersection of roads.

If you are a deeply spiritual person, this stunningly piece transcends religious boundaries 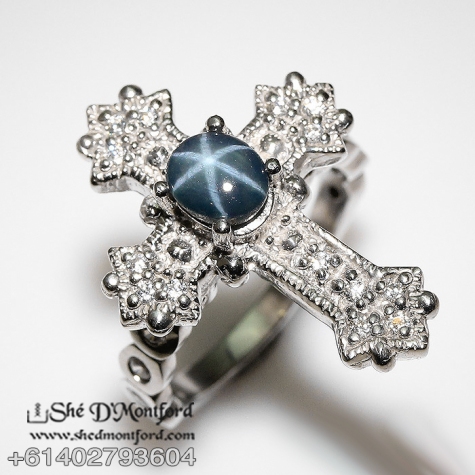 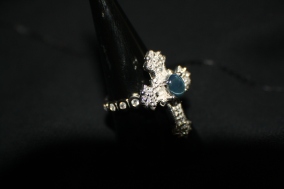 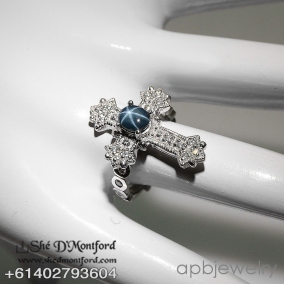 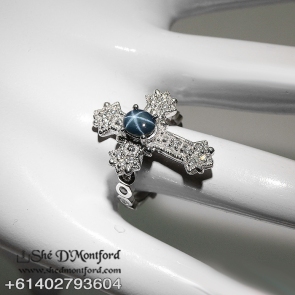 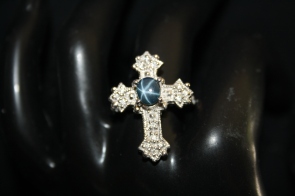 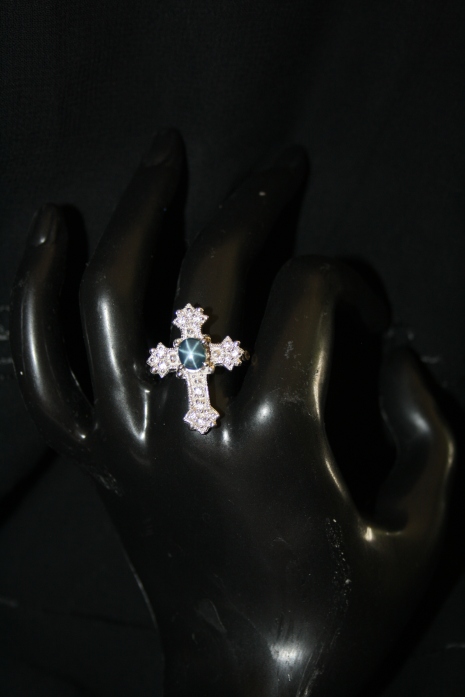 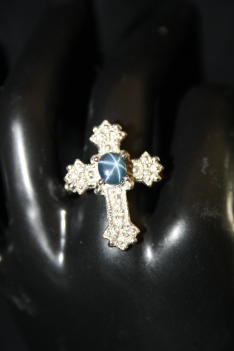