What we are offering you is a bargain – An Authentic Witch Ball that had gathered the energy of the ocean from a century at sea  that is also a wonderful scrying tool  (Gaze into it and you feel your awareness sinking and expanding into a cool green  sea of knowledge,) at a very reasonable price. 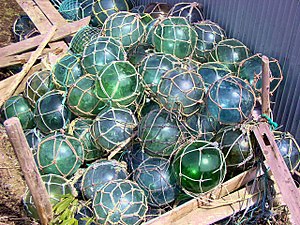 Superstitious European sailors valued the talismanic powers of the witch’s balls in protecting their homes. Witch balls appeared in America in the 19th century and larger, more opaque variations are often found in gardens under the name gazing ball. This name derives from their being used for divination and scrying where a person gazes into them dreamily to try to see future events or to see the answers to questions. However, gazing balls contain no strands within their interior. Glass studios traditionally make a witch ball as the first object to be created in a new studio.

There are several variations relating to the purpose of witch balls. According to folk tales, witch balls would entice evil spirits with their bright colours; the strands inside the ball would then capture the spirit and prevent it from escaping. Another tradition holds that witch balls or spherical mirrors prevented a witch from being in a room, because witches supposedly did not have a reflection or could not bear seeing their own reflection.[2] Yet another variation contends that witch balls were used to avert the evil eye, by attracting the gaze of the eye and preventing harm to the house and its inhabitants.[4] Please note the reflection of the photographer on the surface of the this antique Witch Ball.

In the 17th century, witch balls and witch bottles were filled with holy water or salt.[5] Balls containing salt were hung up in the chimney to keep the salt dry. Salt was a precious commodity, and breaking the ball or bottle was considered bad luck.[6]

I have  three witch ball on this exchange , dated  from 1890  to 1900. All are all from one verified collection. Their colour, patina, provenance and wear all indicate that these are old and authentic witches balls. This One. An internally salt impregnated clear glass one and a dark amber glass witch ball.

We did some comparative shopping for you and here is a similar item but smaller and not as old shown below   – Note the price.

Genuine Antique.  These floats are most often clear glass.  But not this clear. It is a lovely teal green glass that is genuine and authentic for its period.  About 32 cm or 13 1/2 inches in circumference.  Heavy for size. Perfect Condition – Museum Quality – $ 125.